S-West is located in the heart of the former Philips site known as Strijp S, just to the north of the centre of Eindhoven. Thanks to initiatives by Sint Trudo housing association, and on the basis of a master plan by West 8, the area has in recent years been transformed into a new urban district, which is increasingly becoming a vibrant and trendy part of Eindhoven, the ‘city of light’. Old Philips buildings have been redeveloped, among them the Klok Building and the Anton and Gerard Building on Torenallee – locally known as ‘the Tall Back’ – and together with the new development they form the layered DNA of the district, which was previously inaccessible.

S-West borders the north side of Torenallee, the west side of the St Lucas College and the south side of the monumental Natlab building, where the most historical Philips discoveries were made. The east side of the plot offers access to Ingenieur Kalffstraat. The plan consists of an ensemble of four buildings on a half-sunken car park with a roof garden. The total size of the project is about 30,000 m2 gross floor area.

The four buildings all have a character of their own, and together they subtly acknowledge the area’s industrial past

The four buildings all have a character of their own, and together they subtly acknowledge the area’s industrial past. The plinth along Torenallee is given a commercial function. In addition, the informal route through the neighbourhood extends through the plan, from the neighbouring SAS building through the courtyard gardens of S-West and to Torenallee. 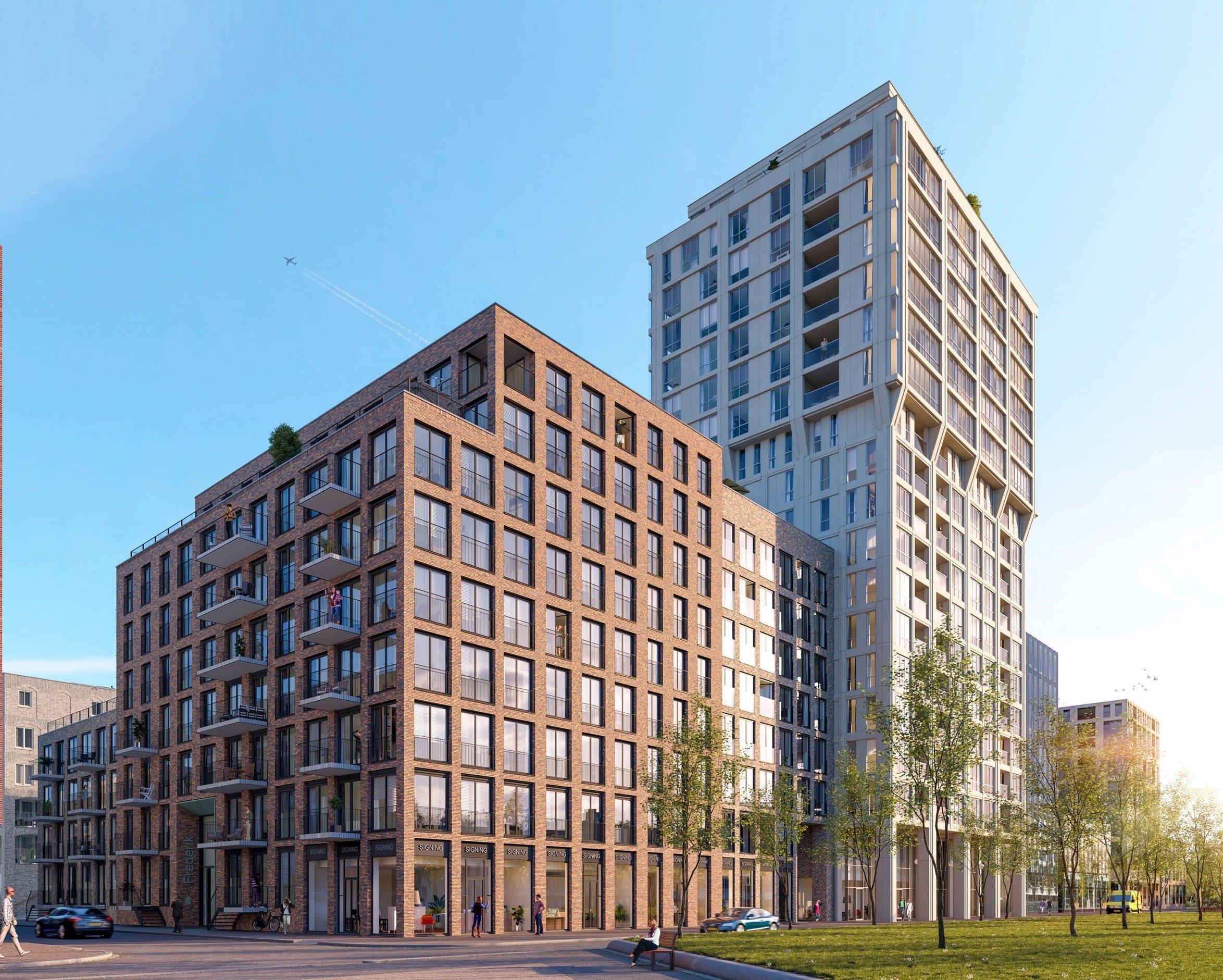 A striking 60-metre-tall tower on the urban Torenallee, with a cantilevered head, slightly protrudes from the building line in the form of a two-level colonnade. The 18-floor tower, called ‘Frits’, is classically composed of a plinth, body and crown, yet it also echoes the architecture and tectonics of a concrete silo building with its vertical emphasis. With its cantilever that extends around all sides, the crown forms a striking landmark within Strijp S. The whole tower has a high-quality light sand-coloured polyester concrete façade, and lots of fenestration in the form of large industrial windows. 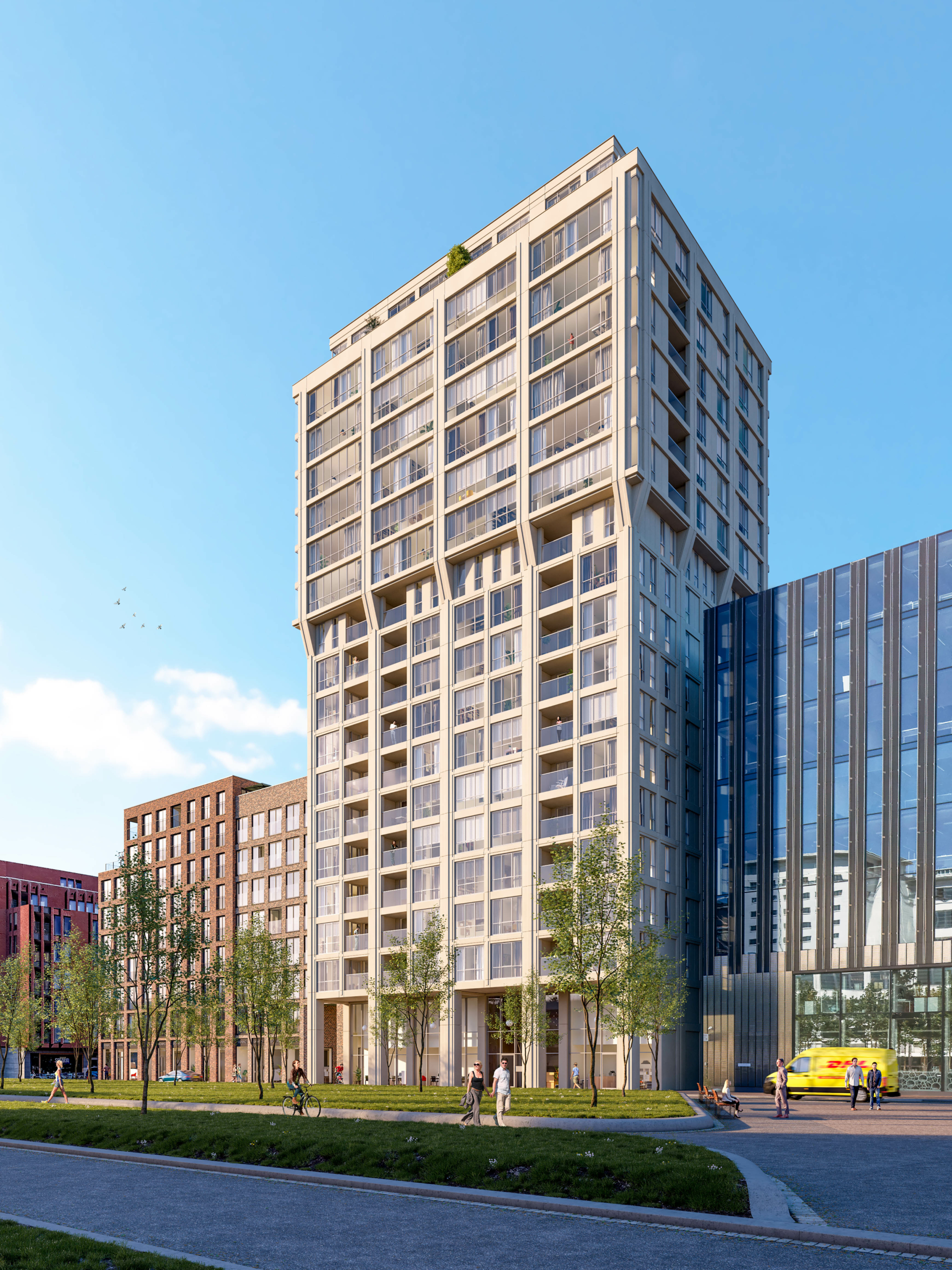 Next to the tower is a hefty and tiered corner block called ‘Frederik’, which references the archetypical early industrial architecture: urban structures with iron escape stairs and balconies as functional ornaments. The corner solution is remarkable because of its gradually changing facade grid in which windows vary in size from the plinth upwards and from the edges to the corner. The industrial character is also referenced in the vibrant and robust brickwork that ranges in colour from bright orange to dark brown with darker joints.

The third block is a linear and more graceful block called ‘Maria’ placed perpendicular to Ingenieur Kalffstraat and dividing the courtyard garden into two parts. The arches of the old Radio Building – which stood on Kastanjelaan in Strijp S, provided the inspiration for the design of the different arches on all sides. The building, which steps back on the south side, is faced in mouse-grey hammered hand-moulded brickwork with brushed joints.

In the angle of the Natlab building we place a small L-shaped block with a saw-tooth facade to Ingenieur Kalffstraat and a stepped volume at right angles, bordering the rear side of the former Natlab. The architecture of ‘Benjamin’ echoes industrial structures and is faced in expanses of 65-mm-tall ochre-yellow brickwork that are cut horizontally by balconies, terraces and galleries, calling to mind loading platforms, and are connected by a concrete band. 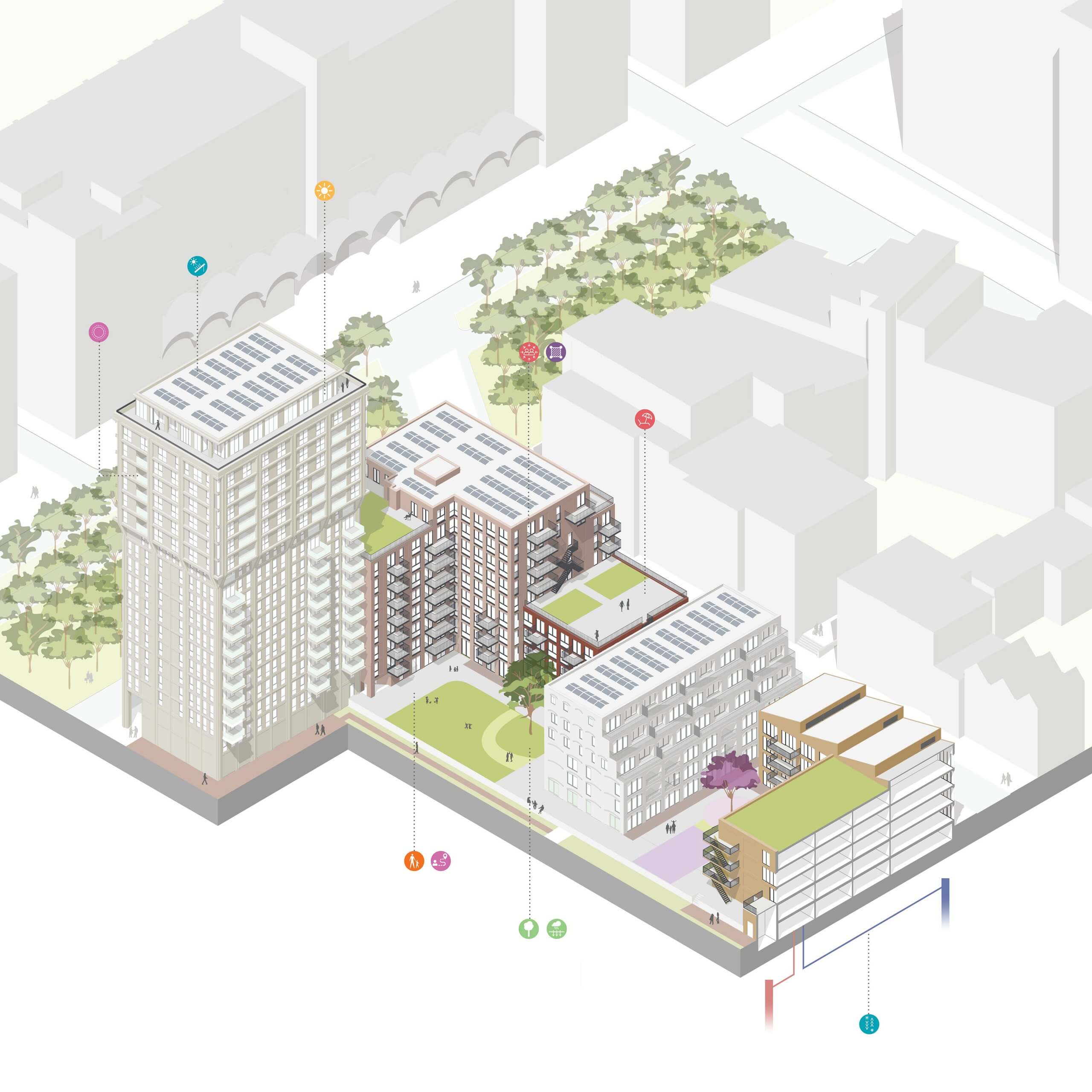 The green courtyard connects the residents of the four different building volumes. The greenery is continued on the lower roof parts, where block “Frederik” has a collective roof terrace. Solar panels have been placed on the upper roof parts, which, together with a collective thermal energy storage system, ensure a sustainable energy concept.